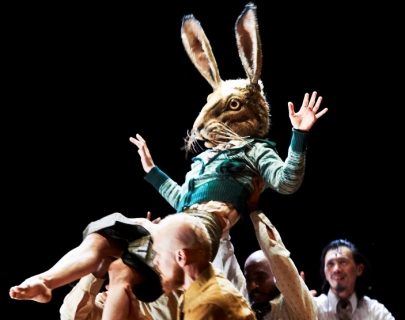 The two halves of Michael Keegan-Dolan’s thrilling dance theatre double bill are a contrast in light and dark that mirrors the Stravinsky music of the same name.

The imagery in The Rite of Spring is dark, shocking, violent and sexual. The rhythmic elements of the music are played out in scenes of a pagan fertility rite, as age is sacrificed and mother earth is worshipped. By contrast Petrushka is bright and light. Elements of folk dances and warmer days are conjured as the company dances for approval from their ancestors.

Rite is about dark elemental forces, about power and violence while Petrushka is about aspiration, salvation and spiritual enlightenment. Performed by an international cast of 14, both works are theatrical interpretations of the original music that created such outrage and excitement in the early 20th century.

“This double bill is everything contemporary dance theatre should be: uplifting, cathartic, stylish, intelligent” ★★★★★ The Arts Desk

“A story of power, transformation and ritual” ★★★★ Evening Standard

“There’s no doubting the spell of Keegan-Dolan’s imagination” ★★★★ Judith Mackrell, The Guardian

The UK tour is funded by the National Lottery through Arts Council England and the Arts Council of Wales, and supported by Culture Ireland. The Rite of Spring & Petrushka is a Fabulous Beast Dance Theatre production in collaboration with Sadler’s Wells, co-produced with Movimentos Festwochen der Autostadt in Wolfsburg, Brisbane Festival, Galway Arts Festival and Melbourne Festival. The Rite of Spring was developed as a co-production between English National Opera and Fabulous Beast Dance Theatre. Performances of The Rite of Spring and Petrushka are given by permission of Boosey & Hawkes Music Publishers Ltd.