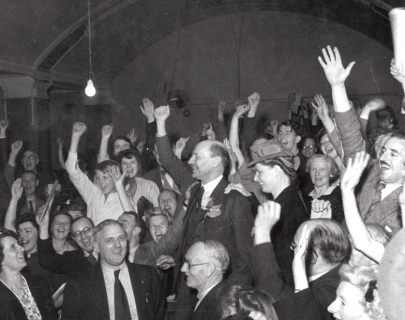 We will be joined by the film’s director Ken Loach, who has had a long association with Warwick Arts Centre, for a very special Q&A after the screening.

This documentary focuses on 1945, a pivotal year in British history in which the unity that carried Britain through the Second World War led to the formation of the Welfare State.

Combining film from regional and national archives with sound recordings and contemporary interviews, writer and director Ken Loach creates an absorbing political and social narrative about one of the most important periods in British history.

“The footage his researchers have unearthed for Britain’s surges of industry and initiative in those Labour years is marvellous, and when he alights on subjects that really fire up passion, such as the founding principles of the NHS, and the piecemeal privatisation that threatens its future, the movie feels like a salutary reminder of exactly what Ken Loach is for.” ★★★★ The Telegraph