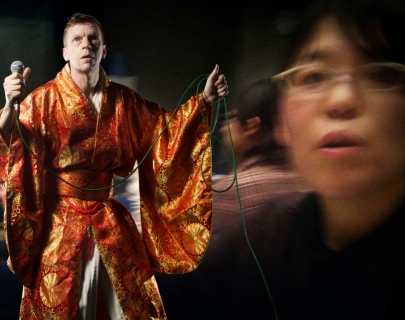 Have you ever fallen in love with a film star? Have they loved you back?

The benshi were live narrators of silent films in Japan, until the ‘talkies’ wiped them out. Now, thanks to playful theatre mavericks Stan’s Cafe shooting a silent film in Tokyo, the benshi is back!
Witty, poetic and subversive, join the benshi for his commentary on Shadows and the lives of its fictional cast. Inevitably he’s in love with the film’s star. As the narrator, the mighty benshi has a chance to change the story and ensure she loves him back… or does he?

Stan’s Cafe is an internationally acclaimed theatre company with a penchant for creating inventive and mind-stretching productions using a variety of art forms. The company has been devising and touring highly original theatre around the world from its base in Birmingham since 1991.