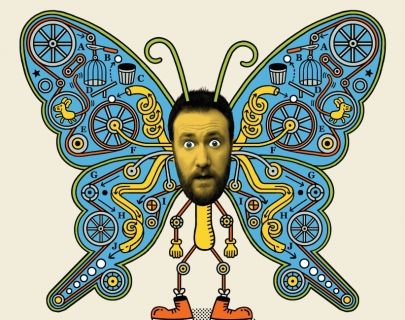 Well, let me introduce you to Monsieur Butterfly, Horne’s most ridiculous and potentially brilliant show yet.

Of course, Mousetrap was a game for kids which meant you lost the rubber band and the ball-bearing would always fall off the chute. And that Honda ad actually took nine months to set up, cost a million pounds and was still only successful on the 660th attempt.

In this unprecedented comedy experience, you can watch Alex Horne attempt something similar in just 60 minutes. He’ll have just one chance. He has not spent a million pounds. (He has, however, invested over £85 on eBay, made over ten trips to Wickes and bought a second-hand van.)

Stupidly ambitious, logistically problematic, definitely dangerous, this is the show Alex has wanted to make for a decade. Finally he will be Monsieur Butterfly. One flap of his delicate wings and mayhem will prevail.

Three-time Countdown champion, award winning comedian and leader of twelve legged comedy – jazz juggernaut The Horne Section, Alex Horne is one of the UK’s most original and inventive comics. In summer 2015 he will star alongside Greg Davies in new Dave TV series Taskmaster based on his critically acclaimed live show which ran at the Edinburgh Festival in 2010 and 2011.

“Unlike any other comedy show you’ll see” ★★★★ Guardian