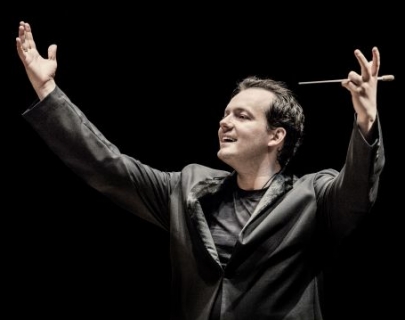 Anton Bruckner heard the beginning of his Seventh Symphony in a dream – played by an angel. You’ll realise why when you hear its soaring opening theme, and that’s just the beginning of one of romantic music’s most stirring spiritual odysseys: a voyage through sunlit mountain peaks and lilting waltz-tunes, blazing triumph and tragic depths.

CBSO Music Director Andris Nelsons has built a global reputation as an interpreter of the German romantic repertoire – he’s one of the youngest conductors ever to be invited to conduct at Richard Wagner’s Bayreuth Festival – and in his final season with the CBSO, this is an unmissable opportunity to hear him in the music closest to his heart. He’s joined by his friend and fellow-Latvian, violinist Baiba Skride, in the teenage Mozart’s lovely Fourth Violin Concerto – the musical equivalent of a refreshing sorbet before Bruckner’s well-aged steak!

“Andris Nelsons ‘on fire’ as he prepares to say goodbye.” Birmingham Post