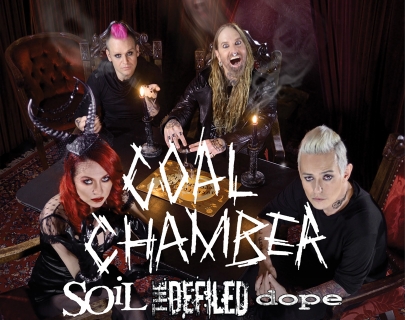 Please note, in a change to the original line up, The Defiled have replaced American Head Charge. For more information, please call Box Office on 024 7652 4524.

The Copper Rooms, the venue and nightclub of Warwick Students’ Union, are proud to announce one of the biggest metal line-ups ever to grace the streets of Coventry as part of its revitalised programme of live music.

Together with the likes of Korn, White Zombie and the Deftones, Los Angeles quartet Coal Chamber were one of the seminal acts in the formulation of what would later evolve into the hugely popular nu-metal scene. Best-known for their pummelling anthems Sway and Loco, their self-titled 1997 debut remains a classic of alternative metal and was followed up by two subsequent LPs, Chamber Music and Dark Days. Following their break-up in 2005, vocalist Dez Fafara went on to front DevilDriver but now returns at the helm of the band which made his name. The four-piece recently announced the release of their comeback album, Rivals, which is due to be released in May.

No visitor to any rock club within the last 10-15 years could fail to recognise the pounding drums and brutal riffs of SOiL’s now-classic signature tune, Halo. The band have shifted over a million copies worldwide of such records as the acclaimed Scars and Redefine, and return to UK shores reunited with original vocalist Ryan McCombs and an arsenal of new tunes under their belt from their sensational 2013 album Whole.

The Defiled are a four piece British industrial metal band from London, mixing groove-laden hardcore/metal with electronic influences. They have been described by Kerrang! magazine as “The saviours of UK Metal” and championed by Metal Hammer as one of the leaders in a new wave of British metal.

Rounding out the bill are Chicago industrial legends Dope, who are currently hard at work on a two-part album entitled Blood Money. With songs featured on several key movie soundtracks in the late 90s and early noughties, the band quickly established themselves as firm favourites within the alternative scene and have toured with everyone from Alice Cooper to Kid Rock. Expect a line-up of killer originals and jaw-dropping covers to open up the show from these contemporary metal mainstays!