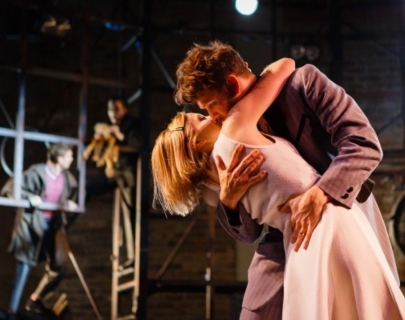 The ever inventive Kneehigh return with their blazing new show. Fasten your seat belts; it’s going to be one hell of a night!

Based on the Beggar’s Opera, John Gay’s classic musical satire, Dead Dog in a Suitcase (and other love songs) is busting with wit, wonder and weirdness. An extraordinary Kneehigh cast of actor-musicians shoot, hoot and shimmy their way through this twisted morality tale of our times… by turns SHOCKING, HILARIOUS, HEARTFELT and ABSURD!

Echoing Gay’s original, the live score plunders the sounds of our times. Trip hop combines with folk, Renaissance polyphony with psychedelia, ska with grime and dubstep to create a gorgeous and powerful musical mix.

What the HELL is the world coming to?
This is now, this is it
The world is poor and man’s a shit
The game is rigged, nothing’s truer
Death’s a joke and life’s a sewer!

“This latest manifestation of The Beggar’s Opera, Jon Gay’s satirical ballad opus, could not be finer” ★★★★★ Liverpool Echo

“A sheer delight, worthy of the standing ovation” ★★★★ What’s On Stage