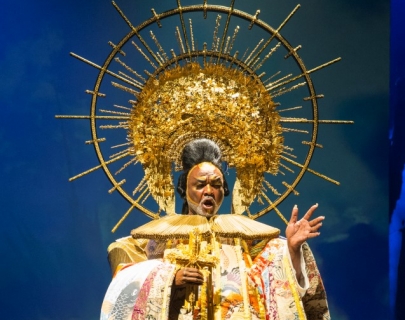 Unseen in London for many years, and never previously at ENO, Berlioz’s Benvenuto Cellini is forged anew at the London Coliseum by director Terry Gilliam and ENO Music Director Edward Gardner – the identical pairing responsible for the company’s award-winning The Damnation of Faust in 2011.

That production unleashed Gilliam’s inexhaustible imagination as a storyteller of the first order, and Benvenuto Cellini offers this theatrical showman an equally rich canvas simply begging for his special flair.

With its stunning visual and musical set pieces such as the Mardi Gras carnival, Berlioz’s first completed opera is based on the autobiography of celebrated 16th-century goldsmith and sculptor, Benvenuto Cellini.

Two entwined plots – Cellini’s love for Teresa and his triumphant fulfilment of a commission to cast a bronze statue of Perseus – provide the framework for some of Berlioz’s most vibrant, swashbuckling and tender music, against the plot of thwarted love, elopement, intrigue, disguise, mistaken identity, secular merry-making and sacred ceremony.

A stellar cast has been assembled for this significant new production, led by rising tenor Michael Spyres in the title role, with the stunning soprano Corinne Winters (last season’s acclaimed Violetta) as Cellini’s lover, Teresa, ENO favourite Willard White returns to the company to add Pope Clement VII to his already extensive list of roles.