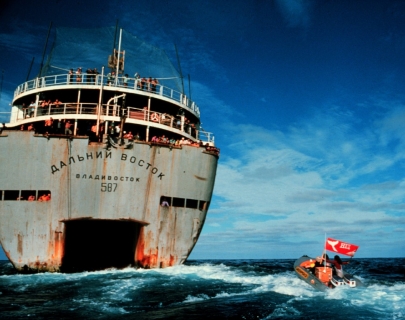 In 1971 a small group of activists set sail from Vancouver, Canada in an old fishing boat. Their mission was to stop Nixon’s atomic bomb tests in Amchitka, a tiny island off the west coast of Alaska. It was from these humble but brave beginnings that Greenpeace was born.

Chronicling the untold story behind the modern environmental movement and with access to dramatic archive footage that has not been seen for over 40 years, the film tells the fascinating story of eco-hero Robert Hunter and his part in the creation of what we now know as the global organization that is Greenpeace. Alongside a group of like-minded and idealistic young friends in the ‘70s, Hunter would be instrumental in altering the way we now look at the world and our place within it.

There will be a live event with an exclusive screening of the film, followed by a satellite Q&A hosted by Mariella Frostrup. The panel will feature legendary fashion designer and long-standing Greenpeace supporter Vivienne Westwood, director Jerry Rothwell, Robert Hunter’s daughter Emily Hunter and other special guests to be announced.