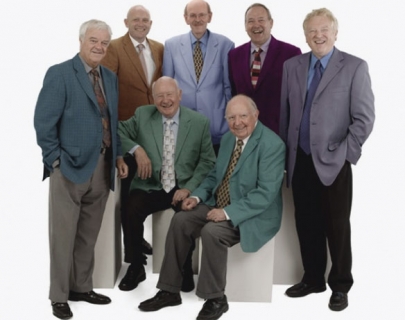 This show will be preceded by a Pre-Concert talk: Jazz and the University of Warwick 1965-2015

A concert in celebration of 50 years of jazz at Warwick, featuring the band of the late, legendary jazz musician Humphrey Lyttelton (affectionately known as ‘Humph’), who was awarded an Honorary DLittt from the University in 1987 – the first jazz musician to be given an Honorary degree by a British University.

Zoltan Sagi, a professional jazz musician and a University of Warwick graduate, will also be doing a guest spot with the Humphrey Lyttelton band. Zoltan played saxophones and clarinet with the Big Chris Barber Band, and now plays with the Stars of British Jazz. Zoltan trained as a teacher at Warwick, and also completed a part-time degree. Locally, he plays with Spicy Jazz, who welcomed Humphrey Lyttelton as a guest, following the award of an Honorary DLitt to Humph.

In January 2008, Humph celebrated sixty years as a bandleader, leading a band which he ranked as one of the very best of his career. The Humphrey Lyttelton Band continues to work, presenting Humph’s music and showcasing his vast music library, a repertoire which extends from early traditional to modern by way of Ellington and Basie. The line up remains the same, with Tony Fisher now ably filling Humph’s role on trumpet. Tony was Humph’s first choice as a stand in.

The band has had, over the years, many distinguished arrangers, among them Kenny Graham, Buck Clayton, Harry South, Eddie Harvey and, most prolific of all, Pete Strange, whom Humph introduced on-stage as ‘our staff arranger’. Not to be forgotten are Humph’s own compositions, of which he recorded well over two hundred, including ‘the medley of his hit’, Bad Penny Blues.

The band continues to work presenting Humph’s music and showcasing his vast music library. There are also featured guest artists on many of the concerts and these include past members of the band.

The band’s range is also shown by the cast-list of artists whom it has accompanied on disc or in special presentations over the years, among them instrumentalists Buck Clayton, Buddy Tate, Kenny Davern, Acker Bilk and Annie Whitehead and singers Jimmy Rushing, Marie Knight, Big Joe Turner, Elkie Brooks, Helen Shapiro, Stacey Kent and Tina May. Perhaps surprising is a single-track appearance on a CD by the esoteric pop group, Radiohead, recorded in July 2000.