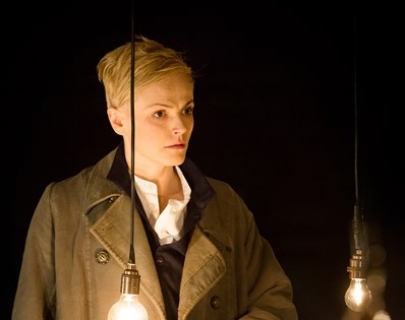 From its sell-out run at Manchester’s Royal Exchange Theatre comes this unique and critically acclaimed production of Shakespeare’s tragic Hamlet. In this stripped-back, fresh and fast-paced version, BAFTA nominee Maxine Peake creates a Hamlet for now, giving a performance hailed as “delicately ferocious” by The Guardian and “a milestone Hamlet” by the Manchester Evening News.

Hamlet is Shakespeare’s most iconic work. The play explodes with big ideas and is the ultimate story of loyalty, love, betrayal, murder and madness. Hamlet’s father is dead and Denmark has crowned a new king. Consumed by grief, he struggles to exact revenge, with devastating consequences.

This groundbreaking stage production, directed by Sarah Frankcom, was the Royal Exchange’s fastest-selling show in a decade. Alongside Maxine Peake as the eponymous prince, a number of other roles, including Polonious and Rosencrantz, are also played by women. Hamlet is brought to cinemas by director Margaret Williams, whose Written on Skin for the Royal Opera House/BBC won the Gramophone Contemporary Award and the Diapason d’or, and producers Anne Beresford and Debbie Gray, the team behind the highly successful cinema broadcast of Peter Grimes on Aldeburgh Beach.