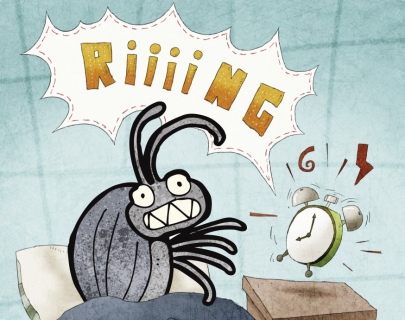 Greg’s an ordinary boy, much like any other. At least, he was… Until this morning.

When he wakes up with clacking pincers on his head, a huge heavy shell on his back and six spindly legs with a mind of their own, life’s about to get a whole lot trickier.

How will he get dressed? Eat his breakfast? Go to the loo? What will his family do when he scuttles out of his bedroom? And how will the rest of the world react to this creepy crawly crisis?

When the villainous Beetle Buster shows up with his Verminator machine, Greg must choose between hiding in the shadows or embracing his new life as a great big mini-beast, supported by his plucky little sister and a perky puppet dog.

With live music, a sprinkling of songs, riotous action and thrilling transformations, this is a funny, messy and moving new show for everyone who knows what it’s like to feel different.

The Boy Who Became A Beetle is being made with 100 Young Producers from five primary schools across the Black Country. They are involved in every element of the theatre-making process: from choosing the show idea and developing the story, through to recruiting the cast and creative team, contributing ideas for the design and music, and, finally, to hosting and promoting a performance in each of their own schools as part of its initial tour.