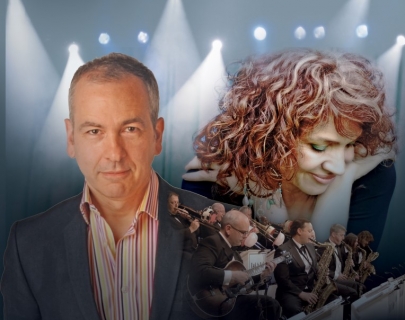 Two of Britain’s leading jazz vocalists present a stylish, sophisticated and entertaining tribute to Frank Sinatra and Ella Fitzgerald, featuring timeless songs such as Manhattan, Lady Is a Tramp, Ev’ry Time We Say Goodbye, Summer Wind, Night and Day, I’ve Got You Under My Skin, How High the Moon and Mack the Knife.
Todd Gordon is renowned as one of the world’s greatest singers in the classic Sinatra mould, while the fantastic Jacqui Dankworth is one of the select few able to live up to Ella’s exacting standards. They are supported by the 17-piece Back To Basie Big Band which has been voted best British Big Band six times at the British Jazz Awards.

“The most flexible and expressive voice of her generation” The Observer
“The new King of Swing.” The Independent
“One of the classiest acts in British jazz singing.” The Guardian
“Todd Gordon stands as the guardian of all that is good in the music I love. I only wish there were more like him.” Sir Michael Parkinson