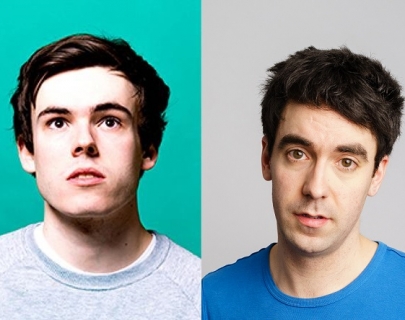 Fresh from the Edinburgh Festival, Adam and Rhys are on tour with their brand new shows, and you get to see both of them for one night only at the Warwick Arts Centre.

After his Fosters award-nominated, sell-out debut show, Adam Hess, star of Live at the BBC, is back and he’s cooler and taller than ever! He’s a funny guy, has good manners and no matter how dark or light it is when he leaves the cinema he’s always surprised.

‘For good-quality gags per minute, there is no better comedian on the Fringe’ Independent

Chortle Best UK Circuit Comedian 2016 nominee ★★★★ ‘Fast, funny, and vibrant, this is an assured debut from a man who deserves all the ‘one-to-watch’ tips he attracts’ Chortle

Don’t worry about it. Honestly, it’s fine. Just get a ticket to see Rhys James bash out another hour of splash-hit, classic stand-up and definitely cool and not pretentious poetry and all will be forgiven.

‘A cut above his humdrum peers (Independent). ‘Has star in waiting running through him like Blackpool through a stick of rock’ Bruce Dessau, BeyondTheJoke.co.uk

‘Operates on as many levels as you have the energy for’ BroadwayBaby.com

The Guardian’s Best Joke of the Fringe 2015