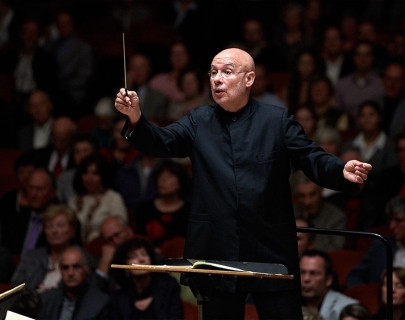 Vast gothic Cathedrals, mighty Alpine peaks… people have compared Anton Bruckner’s symphonies to many things. That’s not really the point. What matters is that Bruckner wrote some of the most beautiful, most thrilling and most heartfelt music ever composed – and that under its veteran chief conductor Dennis Russell Davies, the orchestra of Bruckner’s own home town, Linz, plays that music with an unparalleled insight, authenticity and power. Still, it’s not every day that we get to hear the Sixth Symphony – the work that even Bruckner considered his most original – and no-one who loves great music-making will want to miss it.

That goes double when it’s paired with a rare chance to hear Melvyn Tan – one of the world’s greatest advocates of historically informed performance – playing a modern piano in Beethoven’s Fourth Concerto. “Thoughtful, elegant and refined” is how The Guardian described Tan’s playing; his Beethoven will come up as fresh as new paint.

In conversation with Melvyn Tan.

Update Required To play the media you will need to either update your browser to a recent version or update your Flash plugin.