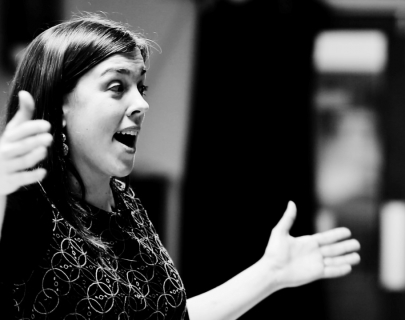 Due to unforeseen circumstances this event has been cancelled. We apologise for any inconvenience. For more information, please call Box Office on 024 7652 4524.

A day of musical exploration, learning songs from around the world, from a Finnish Alleluia to a Zulu lullaby and a Japanese round to a traditional Maori tune! We will sing in a variety of languages and styles, embracing different sounds and ways of moving as we go. The aim will be to sing music from every continent during the day!

Music will be taught predominantly by rote, so there is no need to be able to read music, and for those who do read, it’s a great way of developing your musical memory. This will be a fun and relaxed day of singing and movement, with an informal performance to conclude. It is suitable for anyone who enjoys singing at any level and ability and for anyone who is interested in learning new music from around the world.

Lucy Griffiths is much in demand as a conductor, workshop leader and vocal animatuer. She is Assistant Director of Music at the University of Warwick, where she conducts many of the university’s ensembles and motivates music making amongst students, staff and members of the local community. She is also Musical Director of Severn Trent Water, a post which was created for her after she led their choir to victory in the BBC’s first series of Sing While You Work.

Lucy is a leading expert in the field of music education and engagement, specialising in vocal outreach. She is Conductor of the London Symphony Orchestra’s Junior Choir and Associate Conductor of their Senior Youth and Community Choirs. She was formerly Director of the Royal Liverpool Philharmonic Training Choirs and has also lectured in choral conducting at the Royal Welsh College of Music and Drama. Other recent work includes projects with the Royal Opera House, English National Opera, Welsh National Opera, Opera North, City of Birmingham Symphony Orchestra, Birmingham Hippodrome, Sing Up, Jersey Symphony Orchestra, Newham Young People’s Chorus, Music in Offices, Cranleigh Choral Week, Big Big Sing, London Philharmonic Orchestra, Crisis and African Prisons Project. Lucy studied music at the University of Bristol and McGill University in Montreal. She was then awarded the prestigious sinfonia ViVA conducting scholarship, which allowed her to complete her masters in conducting at the Birmingham Conservatoire