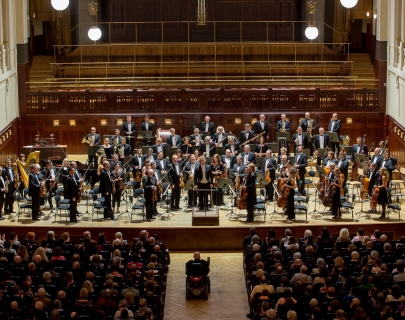 Maybe it’s the characterful woodwinds, maybe it’s those glowing horns; maybe it’s just the irresistible Bohemian lilt that they give to every note they play. But there’s just something uniquely magical about hearing a Czech orchestra playing Dvorak and Smetana – and if there’s any maestro alive who understands that, it’s the Czech National Symphony Orchestra’s veteran chief conductor Libor Pesek.

Tonight’s concert begins amidst the rolling Czech countryside of Smetana’s famous tone-poem, and ends amidst the whooping brass and village celebrations of Dvorak’s Eighth and sunniest symphony – the very definition of feel-good music. But Pesek’s never been limited in his musical horizons. He’s setting Dvorak and Smetana against the atmospheric slow movement of Philip Glass’s cult classic of a Third Symphony.

And when he teams up with the British pianist Mark Bebbington in Grieg’s hugely popular piano concerto, you can expect all the right notes in rather more than just the right order!