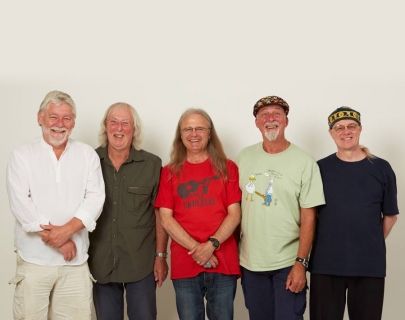 Hailed as the originators of British folk-rock music, Fairport Convention has been one of Britain’s best-loved bands for nearly fifty years. Launched in 1967’s ‘summer of love’, former members include Richard Thompson, Dave Swarbrick and the late Sandy Denny.

Today’s band members retain a passion for live performance making Fairport one of the most entertaining bands on the concert circuit.

With a vast musical repertoire to draw on, Fairport Convention’s shows feature a mixture of long-established favourites and new material. The band’s current set includes songs and tunes from their brand new studio album Myths And Heroes which was released in March 2015.

Fairport Convention has attracted critical acclaim for decades – for example, the band has won a coveted BBC Lifetime Achievement Award; Radio 2 listeners voted the groundbreaking album Liege & Lief ‘The Most Influential Folk Album of All Time’; and Fairport’s story was celebrated with a major documentary on BBC Four television.

Whether you are a long-time fan or a newcomer to their music an evening with Fairport Convention is sure to surprise and delight you.

“Impressive musicians with a great back catalogue… [they] take chances and clearly enjoy themselves.” The Guardian

“Vigorous and confident…the music leapt around the room.” The Mirror