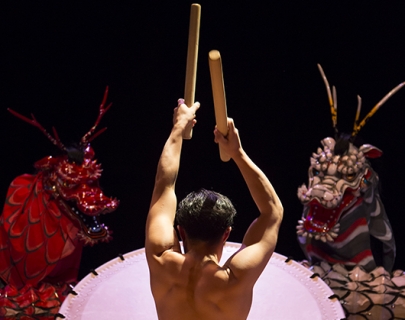 Making its world debut at the Berlin Festival in 1981, Kodo is based on Sado Island in Niigata, Japan, having given over 5,600 performances in 47 countries worldwide under the theme “One Earth”. Spending about a third of the year overseas, a third touring in Japan and a third on Sado Island, Kodo is always on the move, giving performances that transcend borders, genres and time.

Kodo returns to Europe in 2016 with another new production, Kodo One Earth Tour: Mystery, created by its Artistic Director, famed kabuki actor, and Japanese Living National Treasure, Tamasaburo Bando. Twinning contemporary music and dance based on traditional Japanese arts, the production expresses the Japanese sensation of ‘Mystery’ defined by a dynamic and elegant taiko drumming performance. Kodo continues to explore limitless possibilities and forge new directions with its unique and vibrant living art-form. The 2016 European Tour is part of Kodo’s 35th Anniversary celebrations.