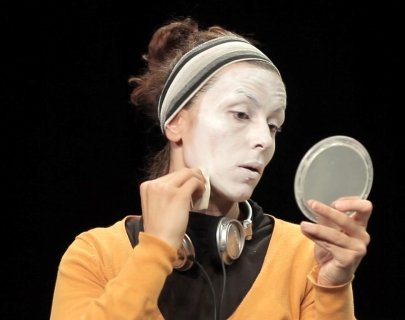 Three strangers catch a train at 5.07am. An hour later, the train is derailed and all three are killed. What thoughts go through the minds of people who don’t know they are about to die?

Through a series of conversations and situations, efforts to understand and be understood, Locus Amoenus describes our struggle to reach our own version of ultimate paradise, an idyllic place where everyday problems disappear. This struggle is a journey, and we often forget to look at the landscape along the way.

A new work from Catalan theatre company ATRESBANDES, winners of BE Festival 2012.

“Barcelona-based theatre company Atresbandes, briefly visiting the compact Lowry studio as part of a new UK mini-tour, have clearly perfected the art of making the mundane appear meaningful and the everyday seem funny.”
The Stage

“…take the opportunity to see this delightful production. You won’t be disappointed.”
Bouquets & Brickbats

“Quirky and completely charming, Locus Amoenus leaves one determined to seek out Atresbandes when they return…”
Manchester Theatre Awards