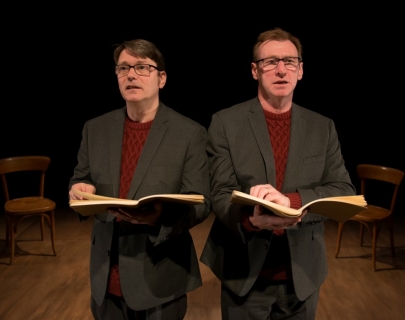 Set during WW2, The Notebook tells the story of a pair of twin brothers evacuated to their impoverished grandmother’s farm to shelter from the conflict. These unnamed children survive and understand the world by a harsh private code, as they try to live by consistent principles in a Central Europe crumbling into cruelty and opportunism.

Kristof’s bold and crisp narrational language provides the basis for a compelling performance as two performers stand side by side in an unsettling and uncanny double act.

“This is the first time in its history that forced entertainment has adapted a novel for the stage – and the results are both relentless and hypnotic.” The Stage

The Notebook is a Forced Entertainment production. Co-produced by PACT Zollverein (Essen); LIFT and 14–18 NOW. A House on Fire co-commission with HAU Hebbel Am Ufer (Berlin), Kaaitheater (Brussels), Teatro Maria Matos (Lisbon), LIFT and Malta Festival Poznan with the support of the Culture Programme of the European Union. Development work generously supported by Lancaster Institute of Contemporary Arts (LICA). The Notebook is based on Le grand cahier by Ágota Kristóf, Éditions du Seuil, Paris, 1986. English translation © (1988) by Alan Sheridan.