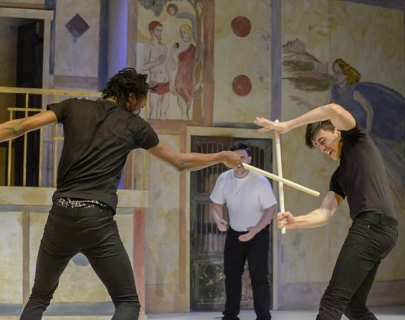 “They Fight” is designed to give students a fun introduction to stage combat. It explores the techniques, safety and performance of stage violence allowing students to explore the construction and delivery of an action sequences. Try your hand at sword fighting and have fun choreographing a bar room brawl, all under the instruction of a professional fight director.

A fight is an integral part of the story telling process. So much so that the play or film it features in could not function in the same way without it. A fight moves the narrative along from one place to another and usually acts as a catalyst to future events. It can act as a climax, tying together the themes, events and characters in a dramatic conclusion. It may also provide a setting for major character development. A fight is a play in micro, and by understanding its construction and performance, actors can grasp an understanding of the play as a whole.

Students will be taught a range of armed and unarmed techniques and how to portray stage violence effectively with correct actions and reactions. They will also gain an understanding of the basic principles of stage combat including angles, staging and misdirection.

Using these skills students are then encouraged to stage their own fights around a selection of scenes looking at how, where and, most importantly, why a fight happens and what effects it has on a performance as a whole?

For over five years Squire Stage Combat has been working across the UK with students of all ages. We provide workshops within schools, universities and private theatre groups, as well as stunt coordination and fight direction for professional clients within theatre, opera, film and television.

Squire was founded in September 2010 with one simple aim; to introduce students of all ages to the exciting world of stage combat. Since then Squire has gone from strength to strength working with schools, drama clubs and professional clients all over the country. We take great pride in having been an influence on hundreds of young actors, many of who are now professionals in their own right. Squire continues to offer a range of workshops designed and delivered by industry professionals, allowing students an accurate and practical insight into the creative industries.

Mark Ruddick, the company founder is a fight director and performer working within TV, opera, film and theatre. He has choreographed fights for the BBC, ITV, The Glyndebourne Opera, Royal Opera House and many other clients. Mark is a black belt in Ju Jitsu with a passion for European martial arts and loves nothing more than duelling with a rapier or of course jumping off something very high.