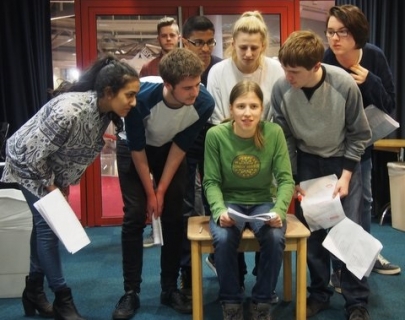 Join our three Saturday youth theatre groups, as they put all this year’s hard work into an end of year performance on our professional Theatre stage. One of the groups have devised a brand new performance from scratch, using their own wonderful ideas. In another, the groups have taken the themes and stories of Shakespeare’s A Midsummer Night’s Dream to create their own new version, and the final group create a performance of ‘new worlds’ based on fantastic character work and monologues the young people have been working on.

With performers from age 8 to 16, some performing on the stage for the very first time, it will definitely be an evening of new ideas, loads of energy and a lot of laughter!

The Incredibles in ‘Piccadilly Town!’ (youngest group)
Take one world-famous scientist, sprinkle in a dash of mischief, a dusting of mystery and a healthy stir of a whole lot of trouble, and leave to stew. This is a recipe for Dr. Guacamole’s new top-secret invention, of course! Join us on this astonishing adventure, created and written, entirely by the youngest Youth Theatre group themselves!

‘An Ofsted Inspector Calls’ (oldest group)
It’s Ofsted Inspection day, but the students of Warwick Arts Centre High School are concerned with something much, much more important…Questions are asked, secrets are uncovered, and the school is plunged headfirst into a mystery that goes far beyond the students’ wildest dreams…