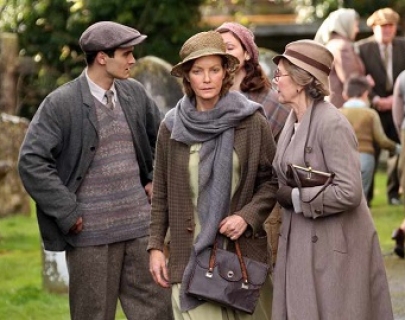 Jersey, 1942. As Hitler strengthens his grip on Western Europe, The Channel Islands fall into occupied hands. Used by the Germans as a base where prisoners of war are put to work in slave labour camps, the residents of Jersey face a future of uncertainty and fear which frays tempers and tests loyalties among the tight-knit island community.

Louisa Gould (Jenny Seagrove), a resident on the island, refuses to give up hope for the homeland she holds so dear, for her sons fighting abroad and for a rescue by Churchill’s forces that never seems to materialise. When a Russian soldier, Feodor (Julian Kostov), escapes the labour camps and seeks shelter, Lou realises she can’t simply hand him back. Alongside her sister Ivy (Amanda Abbington), brother Harold (Ronan Keating) and the village postmaster Arthur (John Hannah), Lou decides to harbour the fugitive. However, as rations on the island become scarcer and tensions rise among the inhabitants, Lou’s defiant attitude and cavalier approach to hiding the fugitive in plain sight arouses suspicion from the Nazis and distrust among her neighbours and she plays a dangerous game of cat and mouse to keep Feodor safe from harm.