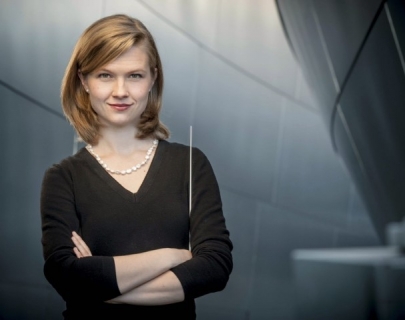 Simon Rattle, Sakari Oramo, Andris Nelsons… the City of Birmingham Symphony Orchestra has made something of a habit of finding the most inspiring conductors of their generation. And if the critics are to be believed, Mirga Gražinytė-Tyla might just be the most exciting yet, with The Guardian describing her as “spellbinding, bewitching”.

The freshness and optimism of her interpretations have energised audiences in Birmingham, and this imaginatively-devised concert gives a wonderful example of what she has to offer – from the classicism and wit with which she approaches her beloved Mozart to her lucid, emotionally charged way with 20th century music, in Messiaen’s exquisite but rarely played Un Sourire (A Smile).

Anchoring the programme are two Romantic classics in which she’ll be able to pour out her heart – Chopin’s dreamy Second Piano Concerto, with Polish pianist Rafal Blechacz, and an early centenary tribute to Claude Debussy: the ravishing La Mer.