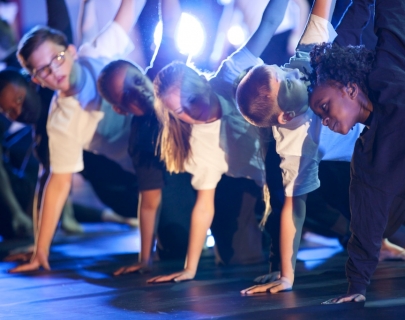 One Giant Leap is an exciting project for children aged 7-9 that embeds the use of the arts into their learning. The project uses physical performance to explore maths and science in the curriculum. One Giant Leap incorporates partnerships with professional physical theatre artists from Highly Sprung, Warwick Arts Centre, Herbert Art Gallery and Museum, Coventry Transport Museum and six primary schools. 360 children have been involved this year.

Through One Giant Leap children take part in a range of activities as audience- seeing live performance, producers- making their own performances and as participants- through practical workshops.

As part of the project the children have taken on the role of Eco-Warriors, working together to understand, explore and protect the planet they live on. Workshops in schools have looked at the wonders of the world, with its huge rainforests, rolling oceans, volcanoes, animal species that are beyond belief and how it is home to the human race.

At the start of the One Giant Leap Project each class was presented with a plant. Each plant carries a message, which the children have explored, trying to discover how the plant might play a part in changing the world for the better.

The outcome event is a celebration of the work the children have done to better understand their world. Each class will present their findings though a mix of dance and drama, with a wide range of topics explored: from the cure of the common cold, air pollution and de-forestation.

It’s a project finale that promises to both educate and entertain, paying tribute to the imaginations and hard work of all the children involved.