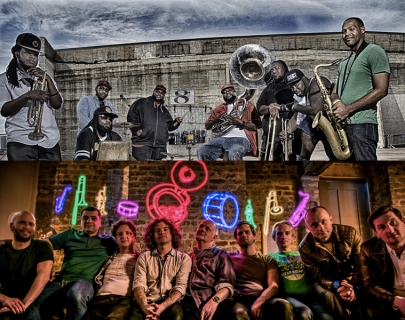 Join us for a riotous transatlantic double billing with two of the worlds finest brass ensembles The Hot 8 Brass Band (USA) and Hackney Colliery Band (UK) performing on one stage – a Warwick Arts Centre exclusive!

Hackney Colliery Band have had a simply phenomenal few years. From playing a 45 minute set at the Closing Ceremony of the London 2012 Olympics and sets at the MOBO, Brit and Mercury Awards to live sessions on BBC Two, BBC Radio 2, Jazz FM and worldwide airplay from many more, from collaborations with the likes of Amy Winehouse and Madness to headline shows at London’s Koko, and a tour schedule even taking in the Faroe Islands, these east London musicians haven’t stopped.

In summer 2016, Hackney Colliery Band released their third album Sharpener which entered the jazz charts at number three (and cross-genre independent charts at number 14) and went on to enormous critical acclaim, with the Guardian heralding it as ‘clever, and enormous fun’ and the Sunday Times describing it as ‘an ingenious blend of showmanship and intelligence’.