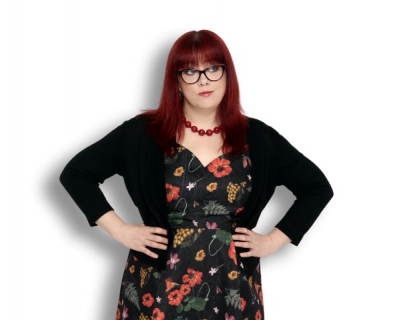 Following another sell-out run at the Edinburgh Festival the Mock The Week regular and host of BBC R4’s Newsjack Angela Barnes will be taking her “beautifully structured show” (The Scotsman) Fortitude on the road.

On November 9th 2016, two momentous things happened to Angela, which have deeply affected her. Donald Trump won the US election and she turned 40.

Now, Angela is in no rush to join the ranks of middle aged, she’s only just getting started. She didn’t become a comedian until 33, only learnt to swim when she was 37, didn’t fall in love until 38 and passed her driving test at 39. Why the hurry? She is un-pensioned, un-married, un-mortgaged and a fully paid-up member of the Peter Pan generation. People have stopped asking Barnes what she’s going to be when she grows up, and instead want to know when she is going to settle down; she hasn’t been bothered by the ticking of the biological clock, thus far – maybe it’s missing batteries. But what happens when the choices you make aren’t your choice anymore? Does her body have different ideas about the future?