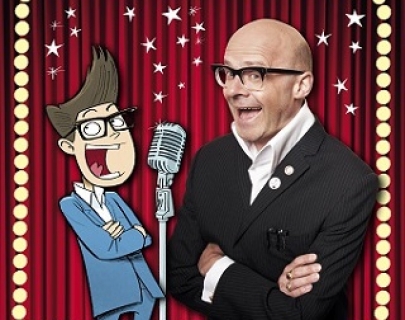 Is your kid a bit of a joker? Do you have more than one comedian in the family?

This is a brand new, family-fun-filled show from Harry Hill the star of ITV’s Alien Fun Capsule and TV Burp and the voice of You’ve Been Framed.

This show is jam packed with laughs and ties in with the release of Matt Millz Stands Up, the sequel to Harry’s critically lauded kids’ book, Matt Millz, about the world’s youngest comedian who dreams of making it big.

This show will offer hints, tips and anecdotes for children who fancy themselves as a bit of a comic, with the self-styled floppy collared loon Harry Hill on hand to run through his dos and don’ts, as well as offering kids the chance to try out their comedy skills.

So kids – bring your best jokes! And if you’re sitting near the front, bring your umbrella! Expect big laughs, practical tips and bucket loads of water silliness.

Harry Hill is a national treasure who has created some of the most successful TV shows of the last two decades, collecting three BAFTAs, eight British Comedy Awards and a Golden Rose of Montreux along the way.