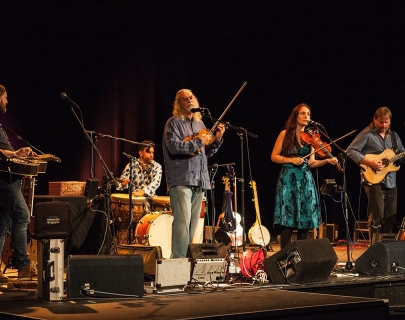 As a trio, Gigspanner, formed by Steeleye Span’s erstwhile fiddle player Peter Knight, has built a massive reputation for dismantling traditional music and song and reassembling it into “music of intelligently crafted brilliance” (Songlines).

Their appearances together as the Gigspanner Big Band are a rare but highly sought after affair, thanks to performances of dazzling musicianship and arresting chemistry.
The originality of their combined musicianship inspired Fatea magazine to write ““What a fabulous team they make, together producing a startlingly new musical form with few, if any, true antecedents. The flights of musical and interpretive fancy are staggering in their natural invention”

“Unhindered by the limits of technical ability” (Spiral Earth), they take self-penned material along with music rooted in the British Isles, and with the flick of a bow, a finely chosen chord or slip of a beat, produce richly atmospheric arrangements layered within a wealth of subliminal musical influences “with notes seemingly plucked from the stars and rhythms from the equator”.

“The Gigspanner Big Band are a unique musical proposition; they are taking folk music down new and enthralling paths. They are also one of the most exciting live bands you are likely to see this year (or any year, for that matter)”
FolkRadio UK

In the summer of 2016, the organisers of FolkEast Festival had the grand idea of pairing legendary fiddle layer Peter Knight (Steeleye Span) and melodeon player extraordinaire, John Spiers (Bellowhead) for a special ‘one off’ concert at that year’s festival.

In the event, it ended up being a genuine festival highlight, with no space to be found in the marquee and people standing five deep in pouring rain. For a few minutes at the close of their performance, with a standing ovation and roars for more, it didn’t seem as though the audience was going to let them go. As the MC commented, it was one of those occasions when people could say “I was there”. It was also clear that leaving matters there was not an option, and so 2018 sees the duo undertaking their first extensive UK tour.

“Peter is a skilled practitioner who conjures and crafts aural images as well as contrasting soundscapes. His years of experience crossing boundaries and genres mean that his music falls beyond categorisation and narrow thinking” Simon Jones, fRoots