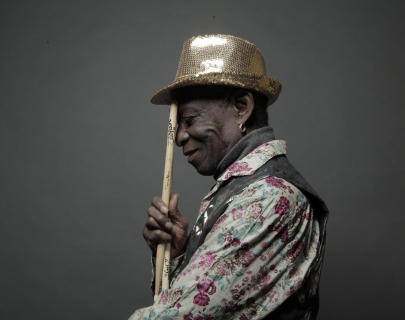 Described by Brian Eno as “perhaps the greatest drummer who has ever lived”, Tony Allen, the legendary drummer of the iconic Fela Kuti returns to his jazz roots in this very special performance – a tribute to seminal Blue Note artist, Art Blakey.

After teaching himself to play the drums by listening to the eminent drummers of the bebop era, Tony Allen drew on electronics, dub, R ‘n’ B and rap to create a style he refers to as ‘Afrofunk’, demonstrating the versatility and diversity of his composing and playing. A prolific collaborator, Tony has worked with artists such as Charlotte Gainsbourg, King Sunny Adé, and Ginger Baker. He also began working with Damon Albarn in 2002 and they have continued to collaborate, recently forming the band Rocket Juice and The Moon, along with Red Hot Chilli Peppers bassist Flea, and working together on Allen’s 2017 album The Source.

This is a change to the previously published programme. Nubiyan Twist will no longer be supporting Tony Allen.