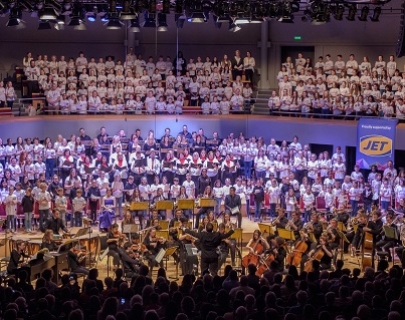 Inspired by a large collection of secular poems of the twelfth and thirteenth centuries, the German composer Carl Orff completed Carmina Burana in 1937 and described it as a “scenic cantata” made of “secular songs for soloists and choruses, accompanied by instruments and magic images”.

Orff believed that everybody had within them an innate musical ability that needs to be nurtured from childhood. His ground-breaking research into the way in which music and movement are instinctively linked in children resulted in a radical change in how music was taught in schools throughout Europe and beyond. Orff dreamed of a Total Theatre, combining music, words, visual design, movement and dance to overwhelm the senses. When he was given a copy of the Carmina Burana poems, he knew he had found the perfect vehicle to bring his concept to life.

There isn’t a more perfect project for the AC Academy singing stars to show their talent than joining Armonico Consort’s professional musicians in a performance of this extraordinary work for chorus and orchestra, made famous most recently by The X Factor. It is set to be a spectacular event which will set the imaginations and hearts of these young singers on fire.