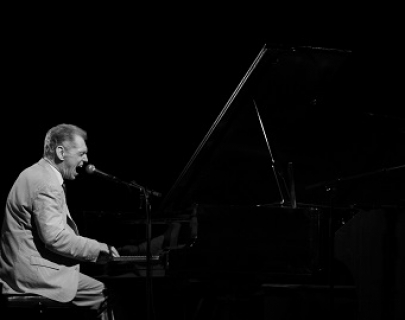 One of a very select number of UK tour dates, Georgie Fame appears in concert at Warwick Arts Centre, for one night only.

With his much loved blend of Jazz and Rhythm & Blues, Georgie Fame has consistently worked in the highest musical circles and has become a true icon of the British music scene.

With more than 20 twenty albums and 14 hit singles, including the Number 1’s Yeh Yeh, Get Away and The Ballad of Bonnie and Clyde, and a long list of collaborations with some of music’s most famous names, including Muddy Waters, Gene Vincent, Bill Wyman, Eric Clapton and Van Morrison, amongst many others, Georgie Fame is a bona fide music legend!

In this very special and intimate evening, audiences will be treated to Georgie’s hits, alongside music from the artists that have influenced him – interspersed with personal stories and anecdotes from his incredible career.

Georgie will be performing alongside his usual band (featuring his two sons) – the line-up of which is Georgie Fame on Hammond Organ & vocals, Tristan Powell on guitar and James Powell on drums.

“What a cool cat Georgie Fame is…handsome and dapper in a cream suit, he ambles onstage. Everyone knows they are in for a treat, even the band.” The Telegraph

“There’s no point in doing it when Georgie Fame could do it ten times better.” Bill Wyman