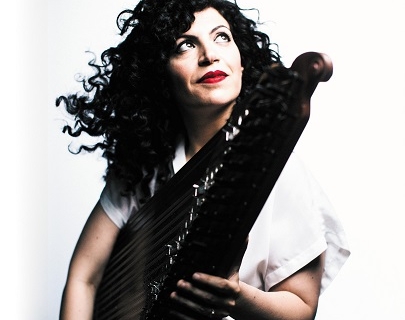 Maya Youssef is a virtuoso player of the Syrian qanun, a 78 stringed plucked zither. Her unique and innovative approach to playing the qanun, originally a traditional instrument, have expanded her audiences to international platforms. She is a regular on the BBC and was featured at the BBC Proms at The Royal Albert Hall, among other prestigious venues and festivals. Maya Youssef combines her extraordinary musical gifts with a generosity of outlook, warmth, humour and optimism.

Her debut album, Syrian Dreams, was released on Harmonia Mundi in November 2017, to critical acclaim.

“It’s an often exquisite, emotional set that constantly changes mood, from sorrow to hope” The Guardian

Maya Youssef will be accompanied in this concert by Elizabeth Nott on percussion and Barney Morse-Brown on cello.