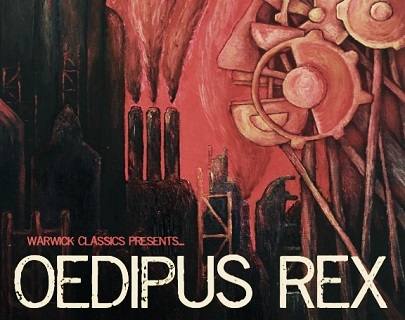 Following the success of the 2019 production of Aristophanes’ Frogs, this January the Warwick Classics Department and Classics Society present Sophocles’ Oedipus Rex (5th century BC). Set in 1928, this musical production gives the famous play a city-noir twist.

The arrogant West, fuelled by its industry, courses towards the Great Depression, themes reflected in Oedipus’ relationship with his own fate.

Oedipus, King of Thebes, searches for the murderer of his predecessor, Laius. His city has become diseased and impoverished, destined to remain as such until the killer is revealed.

The investigation draws Oedipus towards a prophecy he has always dreaded. As the day darkens, fate begins to spiral out of his control.

Tickets to the public performance also includes entry to a lecture in the Theatre at 6pm by Professor Oliver Taplin about the interpretations of the myth of Oedipus.