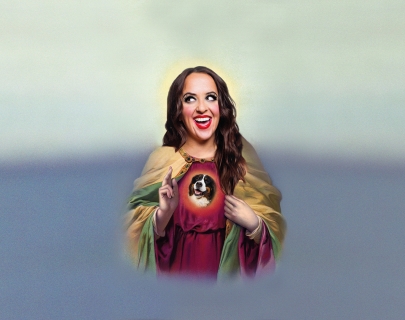 “How different would the world be if women’s stories had been included more in the Bible? Did you know that Adam had a first wife before Eve? Her name was Lilith and she left Adam because she wanted to do reverse cow girl and he would only do missionary – they didn’t mention THAT in the creation myth.”

‘The biggest stand up hit of the decade’
The Guardian

Fresh from a successful Off-Broadway run, comedian Luisa Omielan tours the UK with her highly anticipated God is a Woman show.

Luisa already has three ground-breaking hit shows under her belt. First, she asked What Would Beyonce Do?! (a sell out across the UK and Australia, is what she would do!), then she asked Am I Right Ladies?! and her thigh gap joke went viral with over 45 million views. Then she turned to politics and got a show on the BBC entitled Politics for Bitches. So the next logical step was for Luisa to bring her unique genre of comedy to religion.

Luisa has been featured in The Guardian, Radio Times, Forbes, Vogue, The Metro, Stylist Magazine, The Huffington Post, The Telegraph and countless other publications. She’s been nominated two years in a row for Best Comedy Show at the Melbourne International Festival and loves taking her universal shows around the world. Luisa is the first comedian to be acknowledged with a BAFTA Breakthrough award.

Luisa has created a unique genre of comedy that’s a heart-wrenching journey; part rave and part rally. Her shows are uplifting, thought provoking, ahead-of-the-times and damn funny. She counts Dawn French, Lenny Henry, Richard Curtis and Ruby Wax as super fans. And yes, Luisa will be accompanied on stage by her partner in crime, Bernie – the funniest Bernese mountain dog on the block.

“She should be put on the national curriculum”
The Scotsman